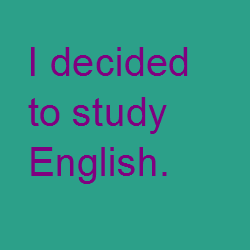 The subjects are the people or things making the decision. The first verb is:

‘Pick’ cannot be used with the fourth pattern. Sometimes it is used as ‘pick out‘ for decisions.

‘Go for’ cannot be used with patterns two or three.

Try not to be repetitive. Nearly all of these are common; only opt is slightly unusual but it is often used in formal situations.

I picked the new textbook.

He will choose his new car tomorrow.

They opt for easy lessons every time.

We picked where to go on holiday.

The company has made a decision who to hire as its general manager.

You chose who to take to the party, didn’t you?

He never decides what he’s doing.

I picked where we’re going on holiday.

She has chosen who she’s taking to the show.

They made a choice to visit their hometown this winter.

I opted to go swimming instead of going trekking.

We have decided to get married this winter.