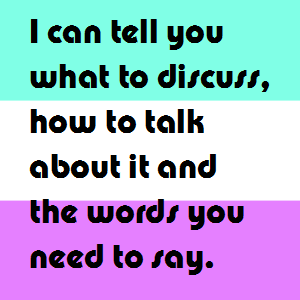 There are so many verbs of speech and so many ways to make mistakes with them. Here, I’ll look at some different examples.

This should be easy. Say is often used as said. In direct speech it is PERSON/PEOPLE + said(and comma) + “whatever they said.”

He said, “It will rain tomorrow.”

It could also be:

“It will rain tomorrow,” he said.

With reported speech it is a bit trickier because you need to change tenses. It is sometimes used in the simple present if the topic is a generalisation or unchanging fact but is nearly always simple past.

He said (that) it will rain tomorrow. (He said it in the past when talking about tomorrow.)

It could also be:

He said (that) it would rain tomorrow. (He said it in the past when talking about tomorrow.)

Be careful with ‘yesterday’:

Yesterday he said (that) it would rain. (He said it yesterday when talking about an unknown time.)

Tell is like say but it is used with opinions or facts. It is frequently used in the simple tenses and perfect tenses too. There are exactly the same reported speech problems with ‘tell’ as ‘say.

He’s going to tell us about how exciting English is.

He told me he loves me.

She tells me everything you do.

She told me (that) she doesn’t want to stop studying English.

Yesterday he told me it would rain.

Talk is an intransitive verb and can be used to say that you said something.

You can use it with more detail, too.

I talked to Sian about the weather.

Discuss is transitive, which means it has to take an object, except in one case that I will tell you about later.

The exception is academic English, and basically examination rubrics. Example:

We conversed about various things. (SOUNDS TOO FORMAL)

We had a conversation about various things. (BETTER)

I hope this helps. If you have any questions, I’ll answer them in the comments.