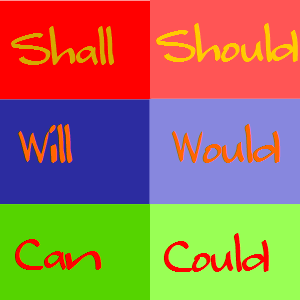 Modal verbs cause students a lot of problems. In this post, I hope to make them a lot clearer for you.

There are other modal verbs not included in today’s post. I’ll write about them next week.

“I shall be late to the party.” (formal)

“What shall we wear, black tie or casual?” (formal and informal)

“In the event of both parties’ dissatisfaction this contract shall be terminated by mutual agreeement.” (formal, written)

‘Should’ is used to talk about a weak obligation, or something that is a good idea to do.

“He should do his homework but it’s sunny outside.”

It can also be used with ‘think’ to give your opinion, usually criticism, in a strong formal way.

“I should think you had better practise English more and talk less about the idea of practising.”

It can be used in third-conditional sentences and questions, too.

“If you were going to stay at their home, you should have taken a present for them.”

‘Will’ is often used for the future tense, and is used to talk about something you plan to do, usually decided at the time of speaking. It is used for talking about yourself and also others. It is more informal than ‘shall’. In spoken English it usually becomes ”ll’; ‘will not’ usually becomes ‘won’t’

“Will you buy some milk at the supermarket on the way home?”

‘Would’ is used to talk about past habits.

“I would often visit the cinema on Friday nights.”

It is also used for conditional sentences and questions.

“If I won the lottery I don’t know what I would do.”

It is used to talk about behaviour, usually with ‘if I were you’.

It is also used to talk about requests in a mild, formal manner.

‘Can’ is used for present ability.

It is also used informally for requests.

“Can you lend me a pound for the vending machine, please?”

‘Could’ is used to talk about past abilities or abilities that started in the past.

“I could play ‘Stairway to Heaven’ when I was twelve. Jimmy Page didn’t write it until he was twenty seven.”

It is used for slightly formal requests. It is more formal than ‘can’.

“Could you please turn the music down?”

It can also be used with conditionals.

“Dad could help you with your homework if you washed his car.”

I hope this helps you. If you have any questions, please leave a comment.