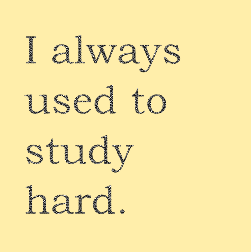 When you talk about your childhood, you need to use past tenses and probably ‘used to’ as well. Here are some tips to avoid some of the most common mistakes.

Some verbs are more difficult than others. There are the ordinary regular past tense verbs such as ‘lived’, ‘walked’ and ‘played’, which are pretty easy to remember. However, there are also the irregular ones such as ‘was’, ‘went’, and ‘made’, which you need to make sure you know. Try using new irregular past-tense verbs in your diary.

Talking about past abilities

When I was nine I could read music and I could play the euphonium a little. The only problem was I didn’t use to be able to carry it to school by myself so my dad had to drive me to school but he couldn’t give me a lift home. In the end, I gave it up because I got tired of carrying it. I took piano lessons instead and I didn’t have to carry a piano to the teacher’s house.

‘Used to’ is used only a little in conversations otherwise you sound unnatural. After you have talked about the action that was done often but then stopped, you can talk about it using the simple past tense or the past continuous tense.

I used to study the piano pretty hard because it was a musical instrument that I could play pop music on. My teacher made me study classical music like Schubert and Grieg but I was always playing The Doors, Duran Duran and The Shamen on my keyboard at home.

Talking about your past thoughts about the future

When you were a child you probably thought that your life was going to be different, perhaps that you would be famous. When you want to talk about such things as ambitions, dreams or intentions (whether they came true or not) you need to use ‘would’ or ‘(was) going to’.

My school friends and I thought we would play a concert at the local youth club but we never practised enough. I knew I was going to have to find new bandmates to succeed.

Other things to think about

When you talk about your childhood, you might want to talk about toys you played with (Barbie dolls, He-Man action figures, board games and television programmes you liked.

I told you about my musical dreams as a child. Tell me about your childhood in the comments.