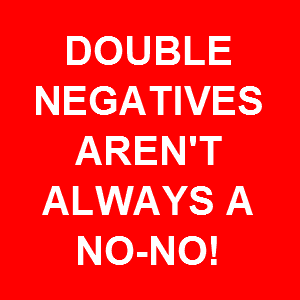 In some languages, to make a negative statement you use a negative determiner and negative verb. English uses only one negative, unless we take a look at the vernacular (slang, basically) or how people might talk at home.

I can’t get no satisfaction

However, absolutely every English native speaker knows what the meaning of the chorus of the song ‘Satisfaction’ means.

No, nobody is misunderstanding. There are two reasons: word stress and context.

When someone says something with a double negative like “I don’t want nobody interrupting me” the words stressed are ‘nobody’ and ‘interrupting’. This stress itself sends a pretty clear message

In context (in a situation) it is even easier to understand. Who would state that they wanted somebody to interrupt? It is much likelier for someone to warn against interrupting.

You never use no double negatives, do you?

Me? Never. However, I do understand exactly what people mean when they use them.

I don’t recommend that people use them because most learners need to use correct, Standard English in general situations. Understanding double negatives can give you an idea of the level of formality someone is using or how streetwise they wish to appear.

The reason Mick Jagger uses the double negative in ‘Satisfaction’ may be because he wants to seem more authentic as a blues-rock musician rather than somebody who attended the prestigious London School of Economics.